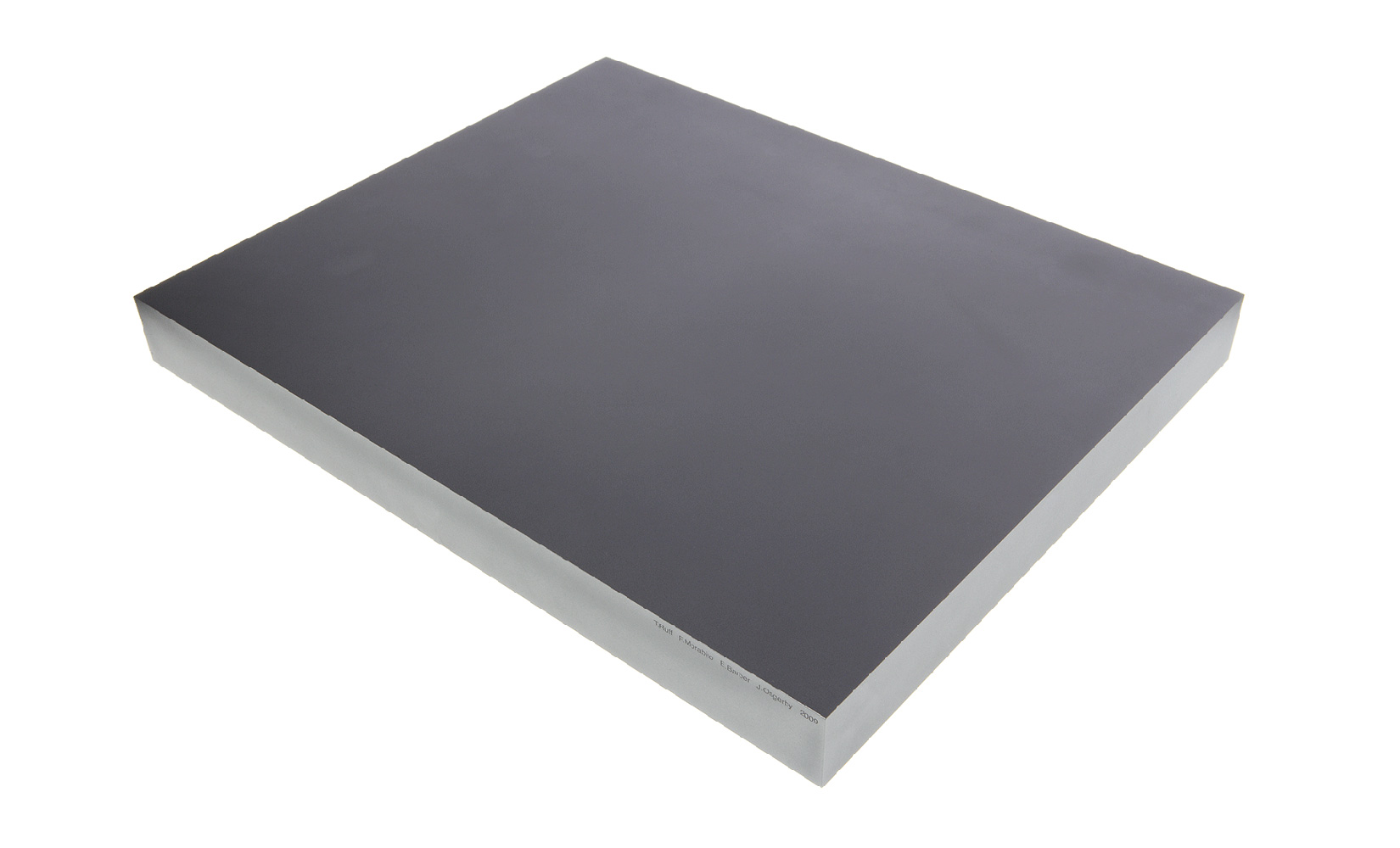 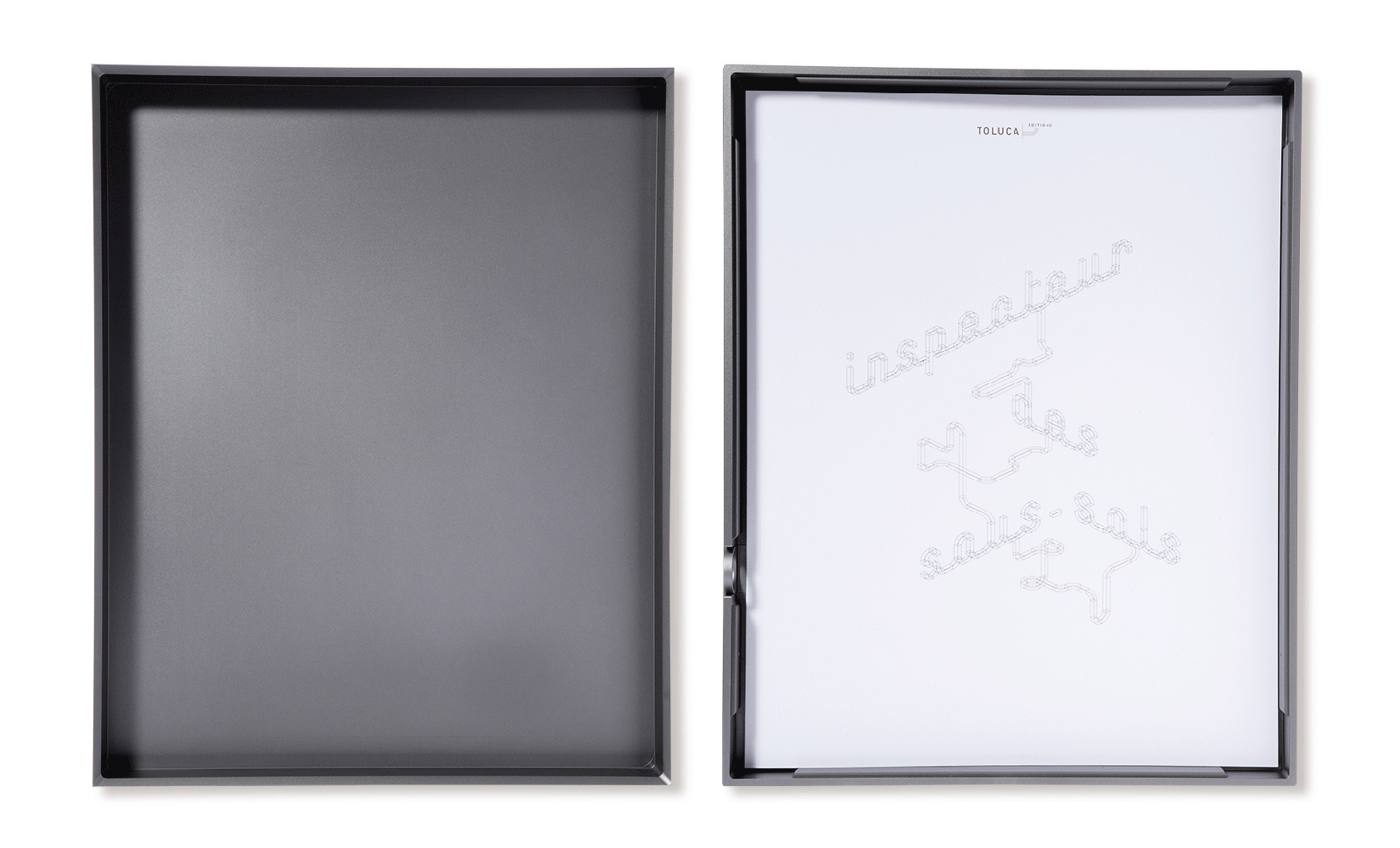 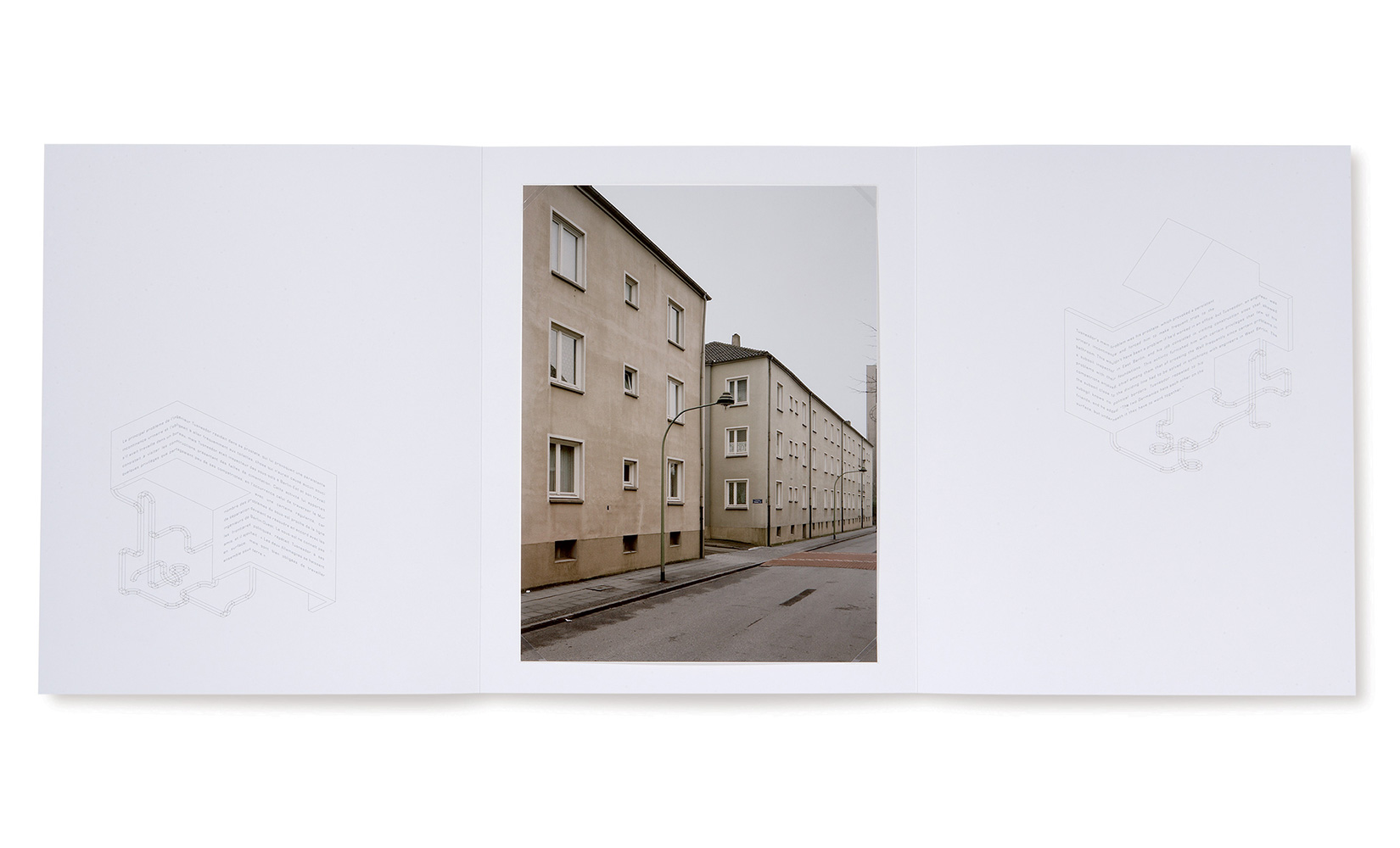 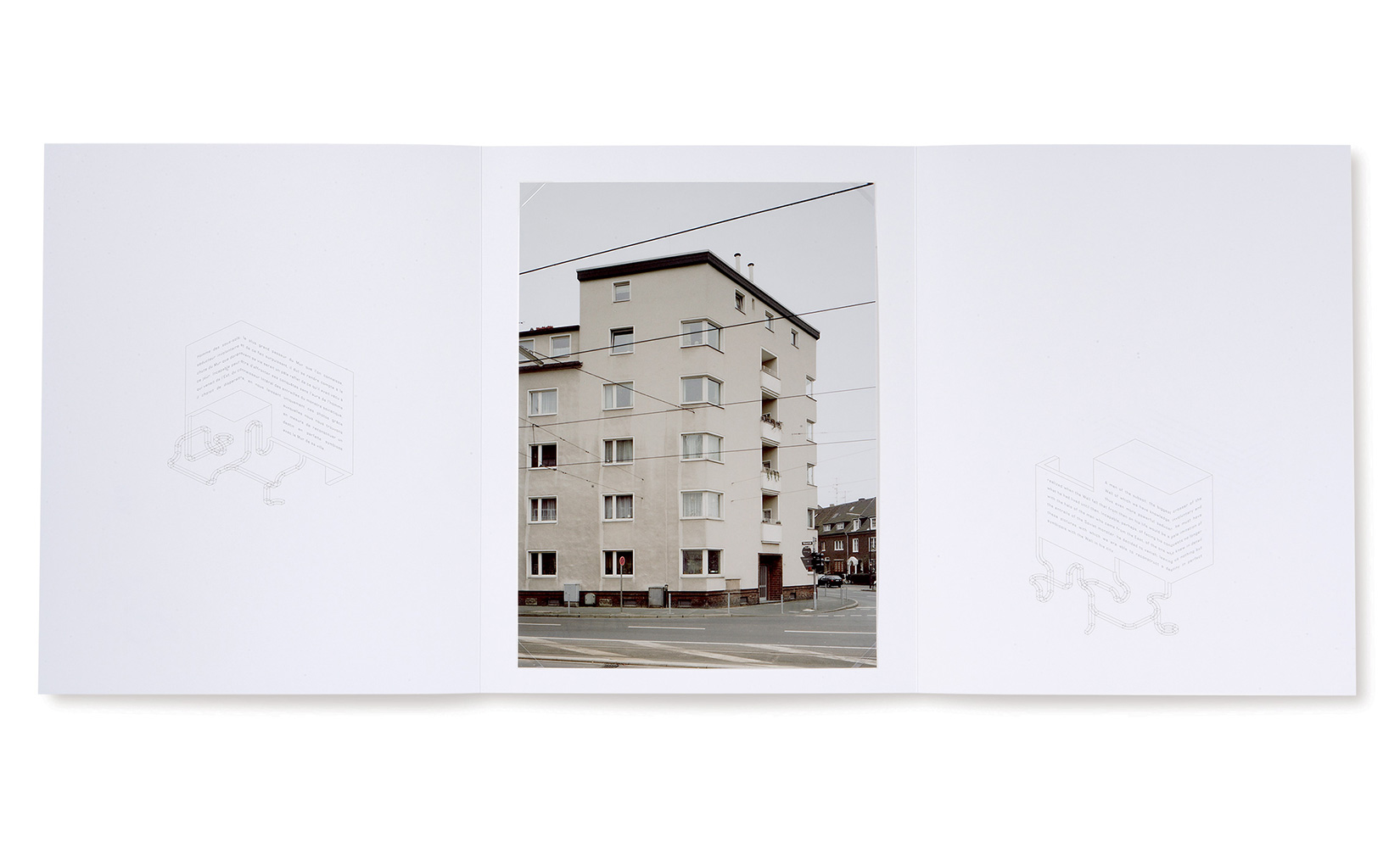 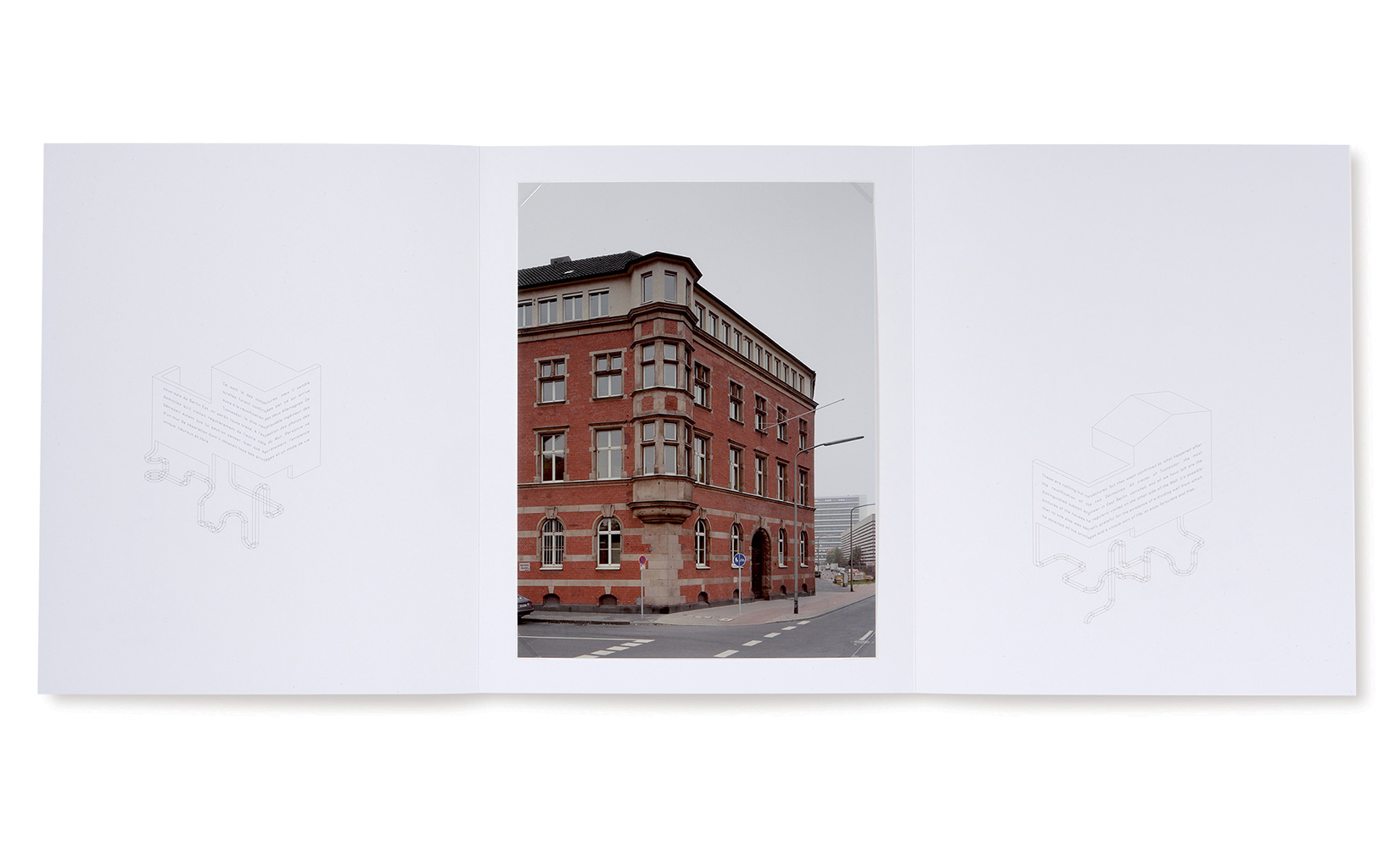 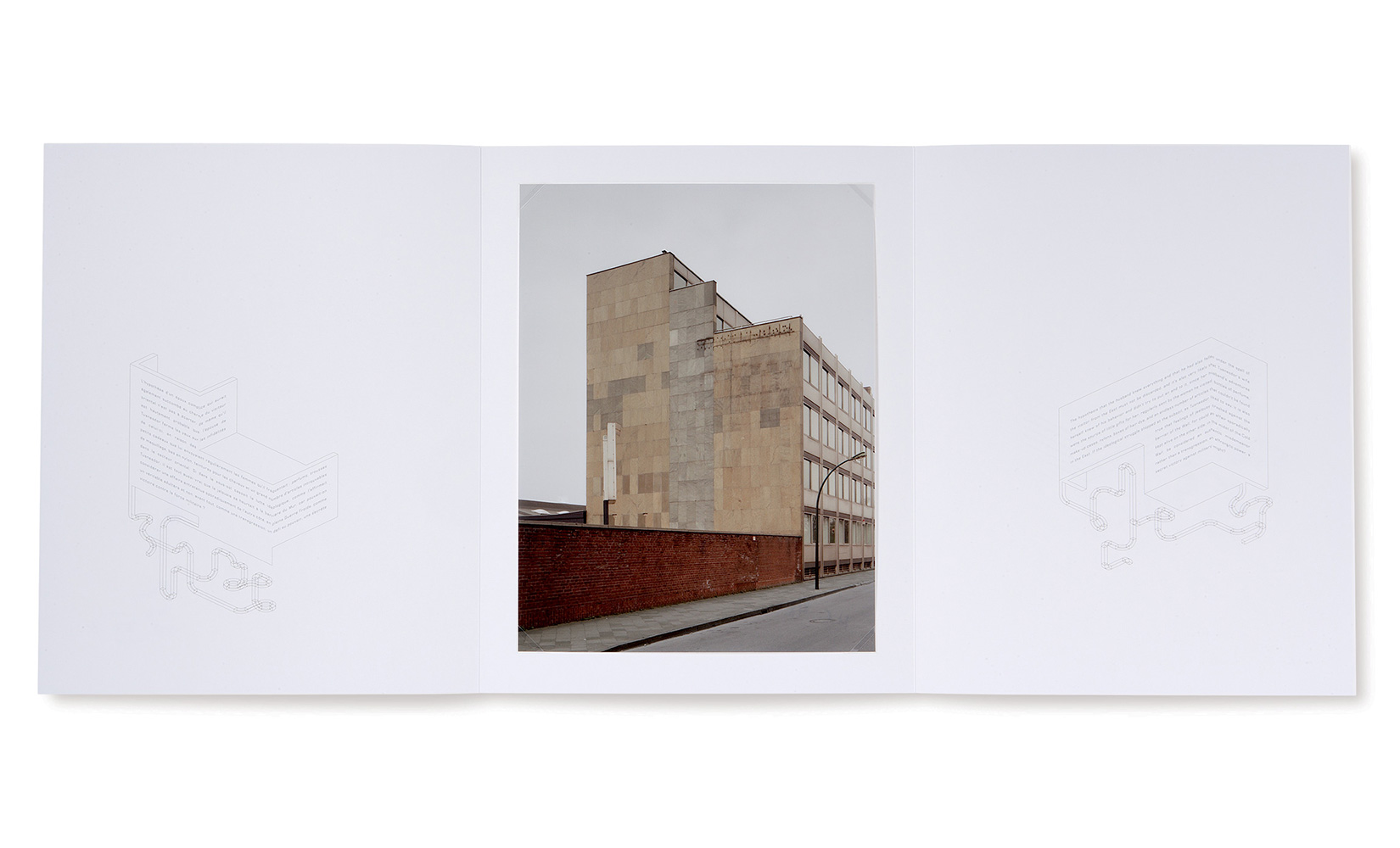 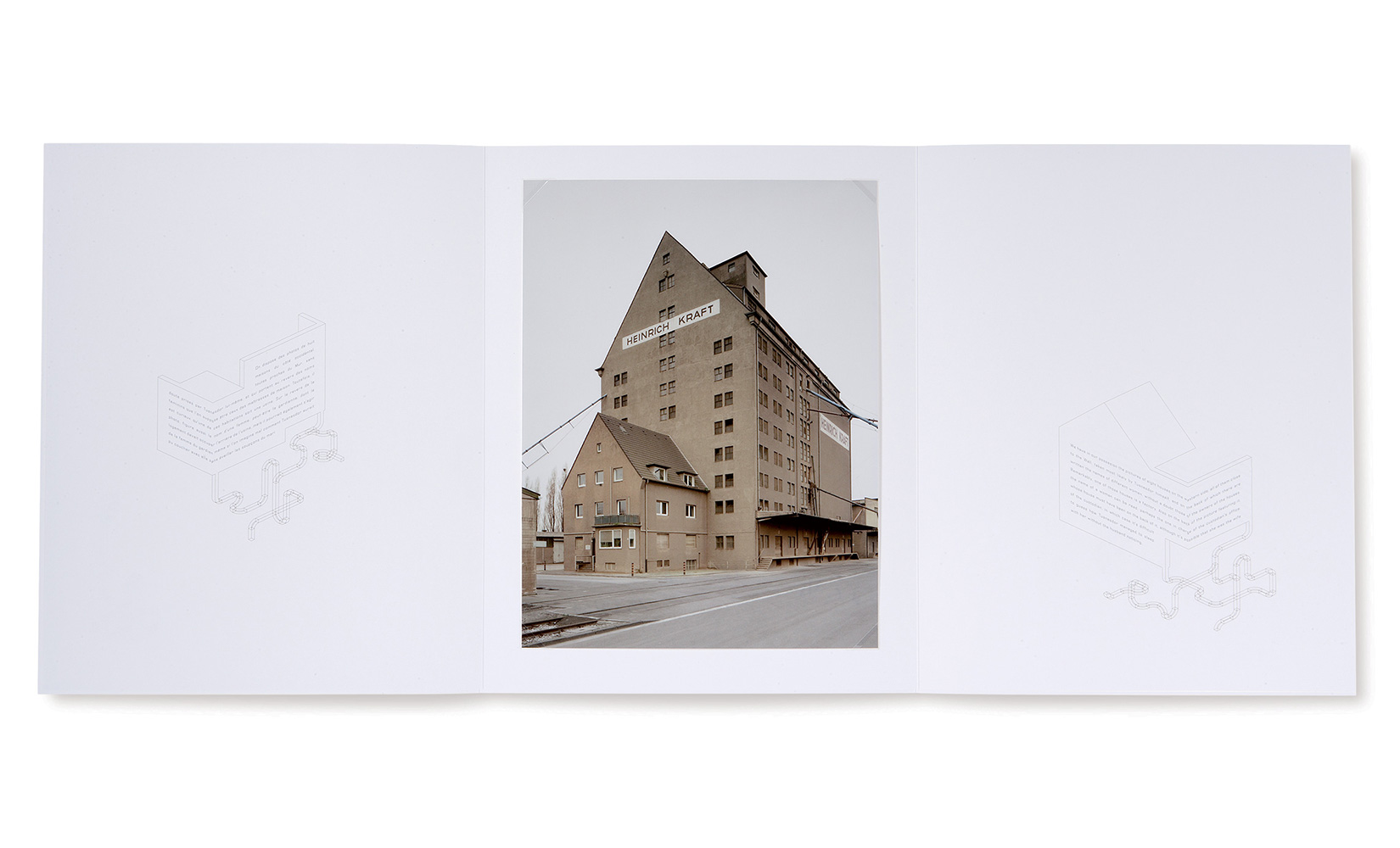 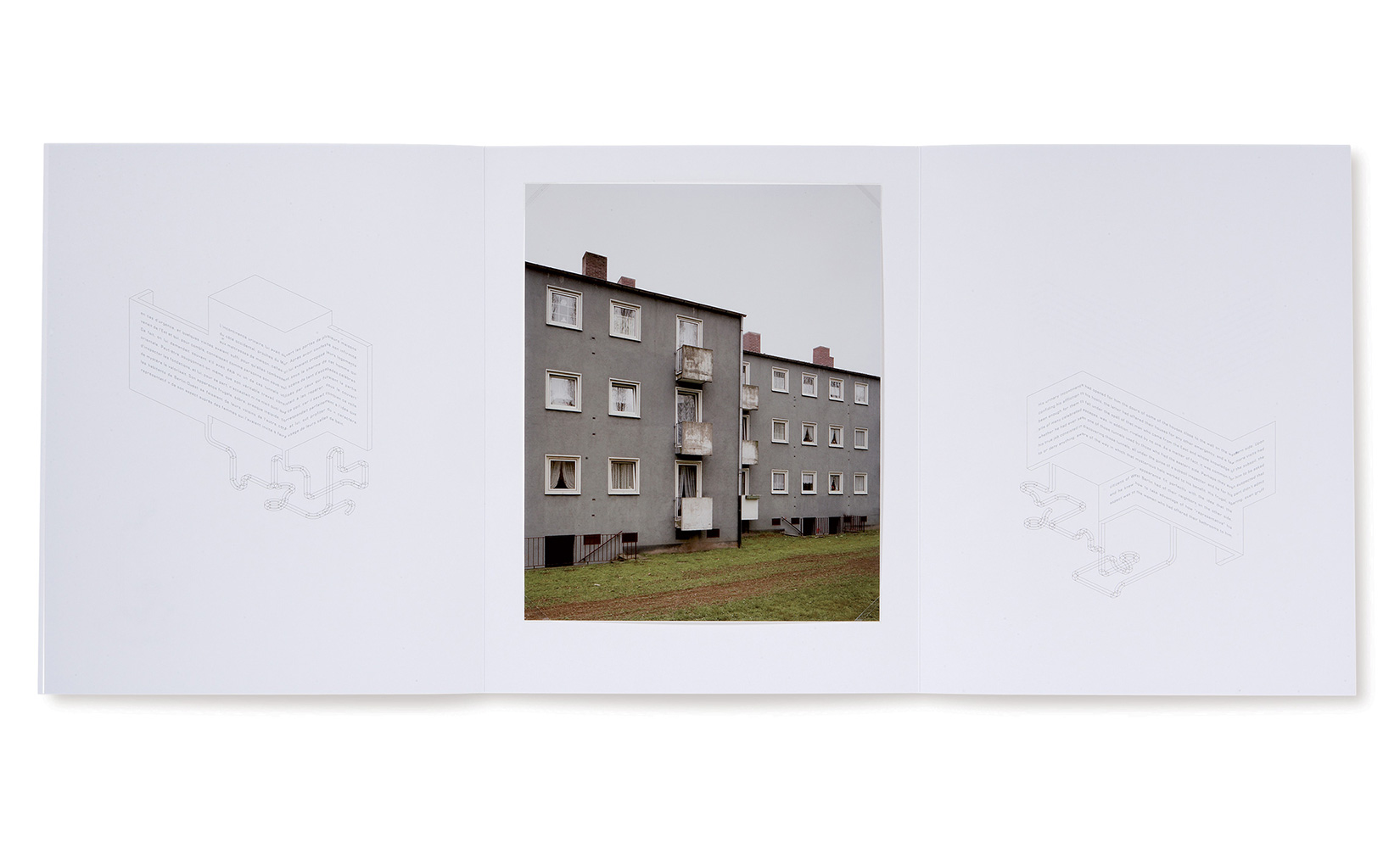 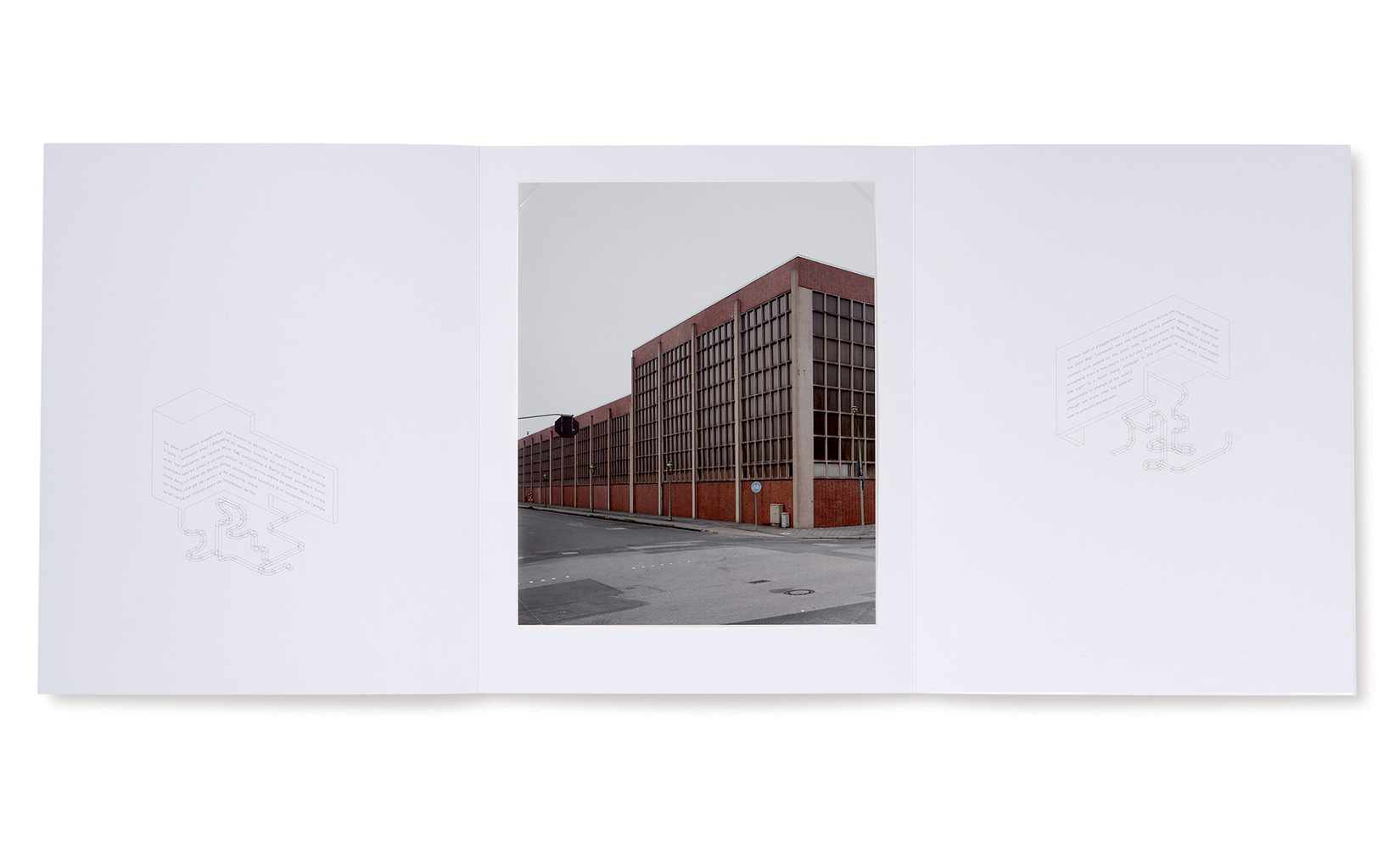 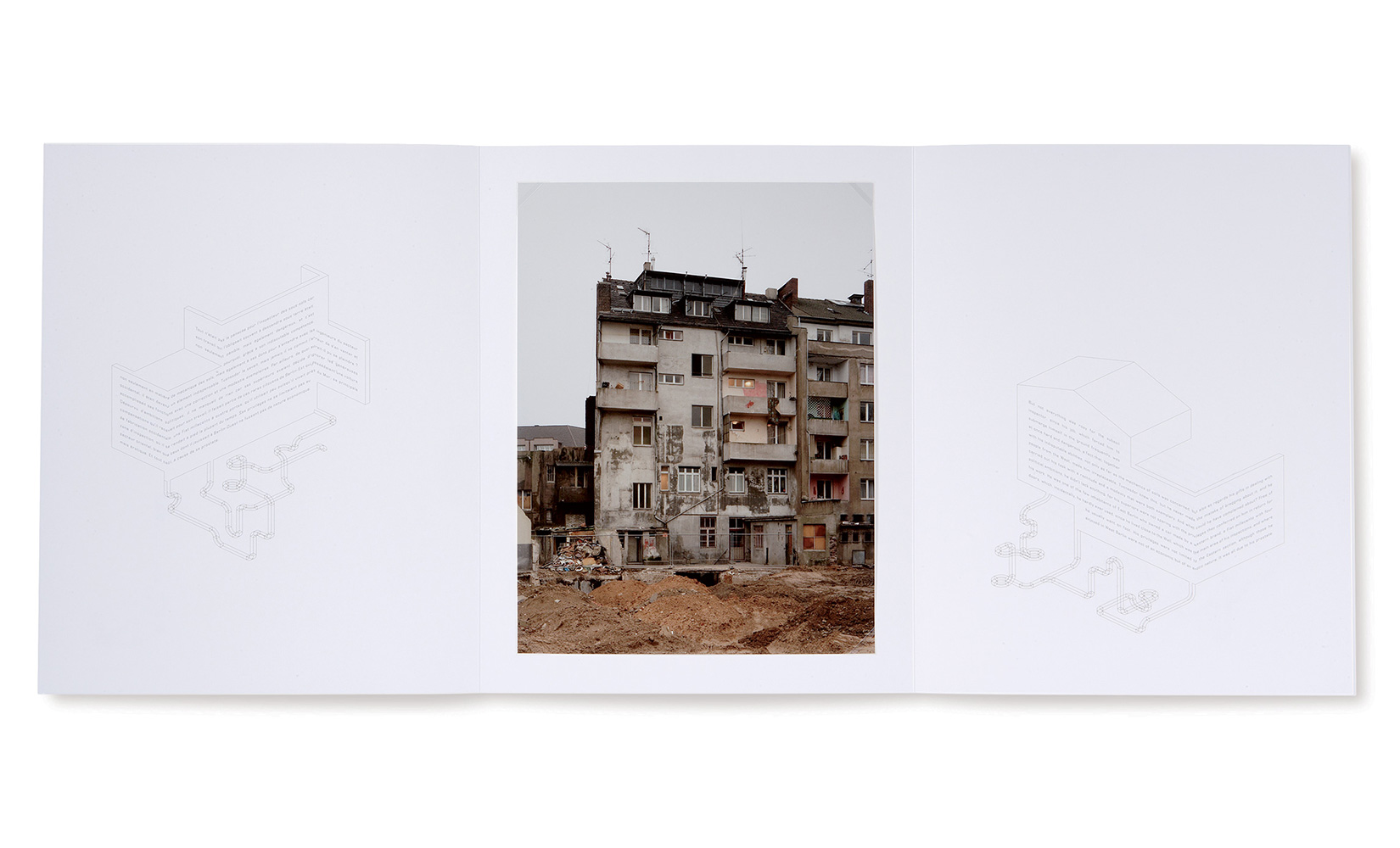 In Underground Inspector, writer Fabio Morabito gives his take on the relationship enjoyed by East and West Germany before the fall of the Berlin Wall, with the distance and peculiar poetry that characterize his prose. He describes the daily life of an East Berlin underground inspector, a philandering husband forced by his profession – and his incontinence – to repeatedly walk across the Wall underground, since “the subsoil knows no political frontier”. After the fall of the Wall, the inspector vanishes, leaving nothing behind him save eight photographs that picture his mistresses’ homes.

In order to build a perfectly smooth, airtight steel plank that mirrors the no-way-out constructions photographed by Thomas Ruff, Edward Barber and Jay Osgerby borrowed a process from the automobile industry that enabled them to machine the aluminium with the precision of a micron.

Thomas Ruff was born in 1958 in Zell am Harmersbach, Germany, one of six children. He has become a leading figure in contemporary art. His personal style of photography is characterized by a distancing from the subject, in particular in the series of portraits that became known internationally and in which he has photographed his family and friends, always taken in frontal view on eye level.

Poet, short story writer, essayist and translator, Fabio Morabito was born in 1955 in Alexandria (Egypt) to Italian parents. He lived in Milan until the age of 15 then emigrated to Mexico, where he started writing in Spanish. Considered one of the most original voices in contemporary Mexican literature, he is the author of several short story and poetry collections, including Lotes Baldios (which won the Carlos Pellicer prize in 1995), La vida Ordenada (2000) and Grieta de fatiga (date??), which were all received to critical acclaim.

Edward Barber (born in Shrewsbury in 1969) and Jay Osgerby (born in Oxford in 1969) have worked together since meeting as students at the Royal College of Art in 1992. One of their first collaborative projects was the Loop Table, a deceptively simple coffee table with a birch ply top looping around the base, which was produced first by Isokon Plus in the UK, then by Cappellini in Italy.

Barber & Osgerby have developed collections for a large number of clients and manufacturers such as Flos, Magis, Cappellini, Coca-Cola, Levi’s , Panasonic, Authentics, Pantone, Swarovski, Venini and Established & Sons, among others. They have also designed furniture for public interior spaces such as The De La Warr Pavilion, the Royal Institute of British Architects and the St. Thomas Cathedral in Portsmouth, England, and sculptural pieces for public spaces including Greenwich Park.

Barber & Osgerby’s designs can be found in the permanent collections of the Victoria & Albert Museum in London, the Art Institute of Chicago, and the Metropolitan Museum of Art in New York.