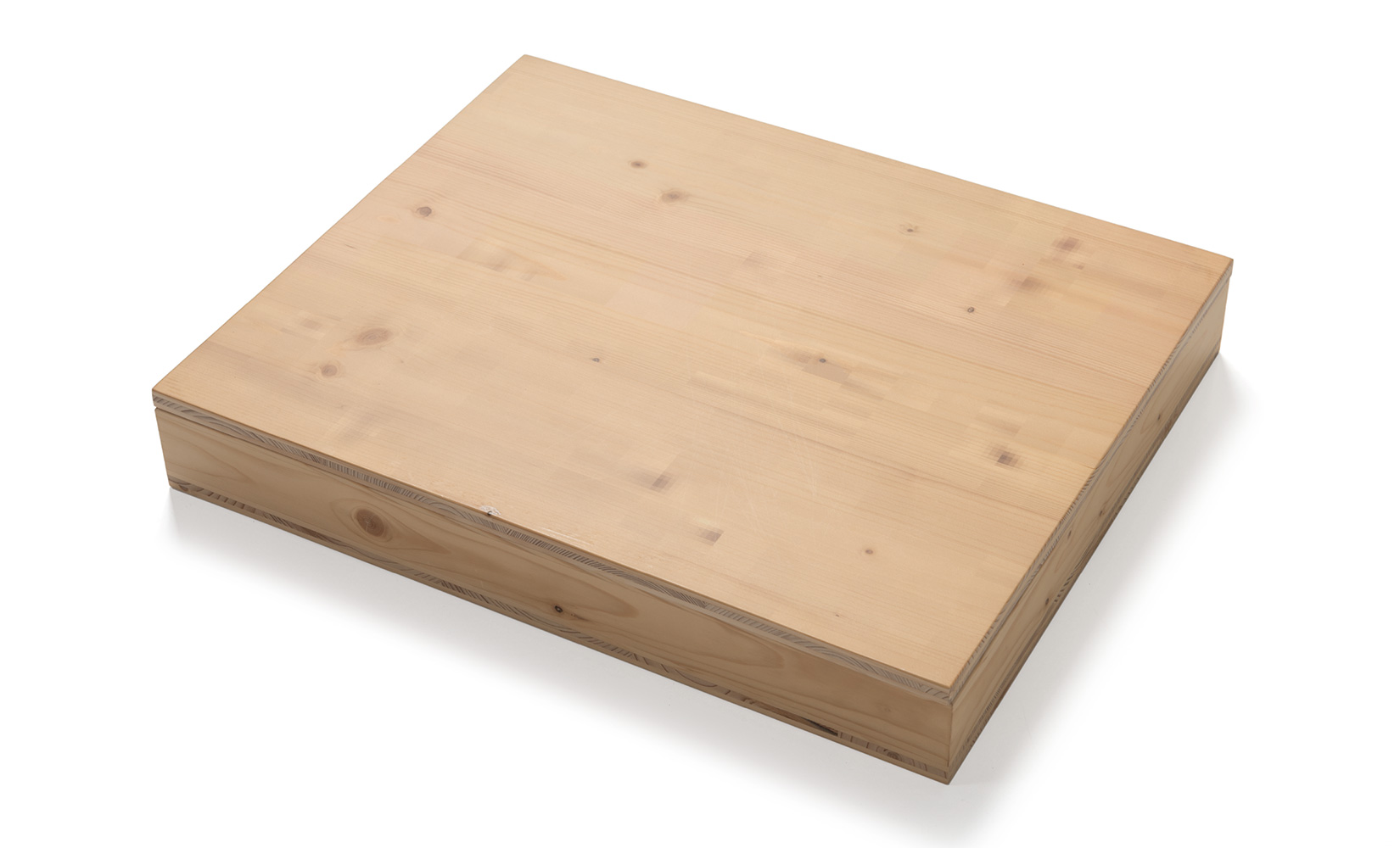 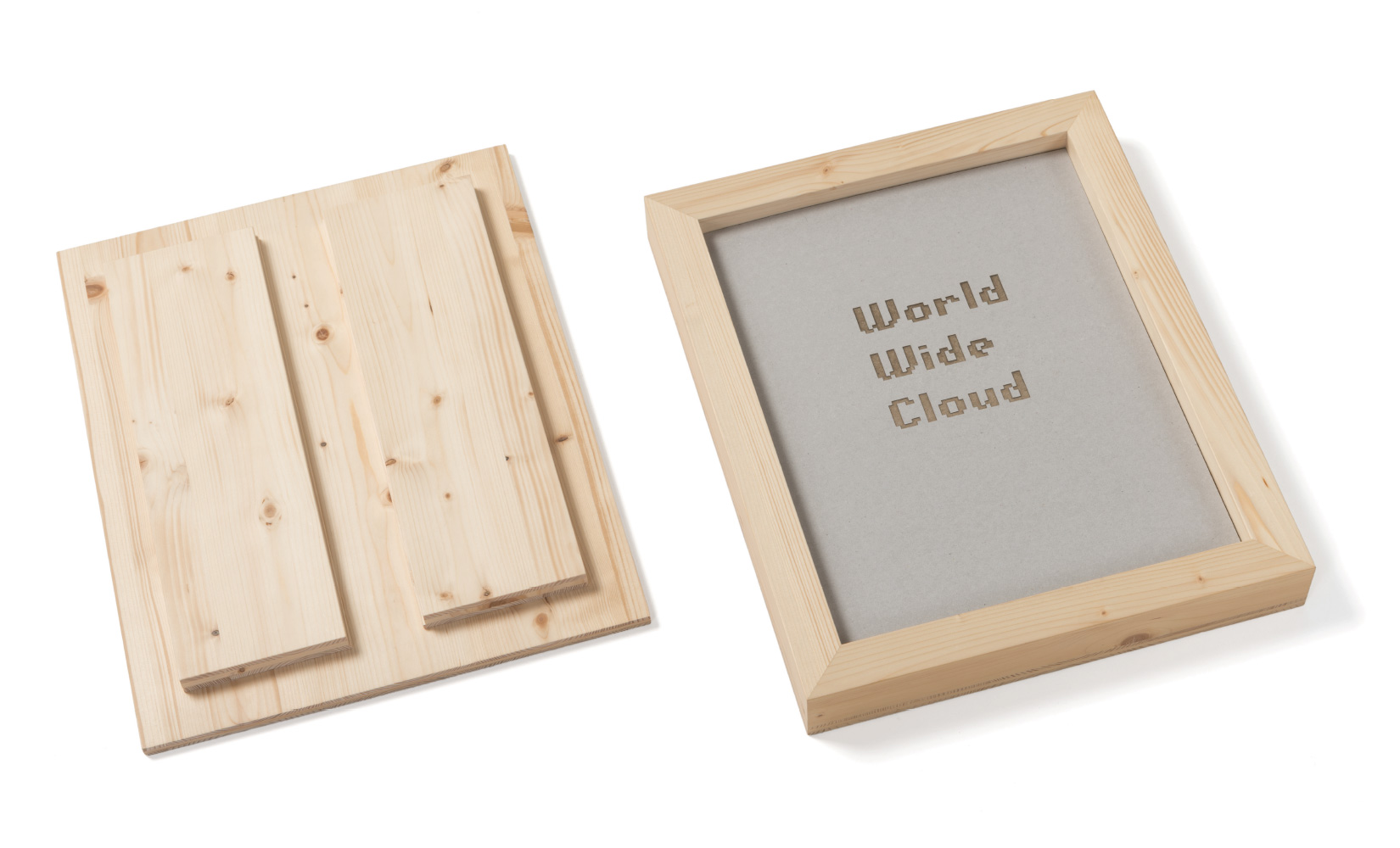 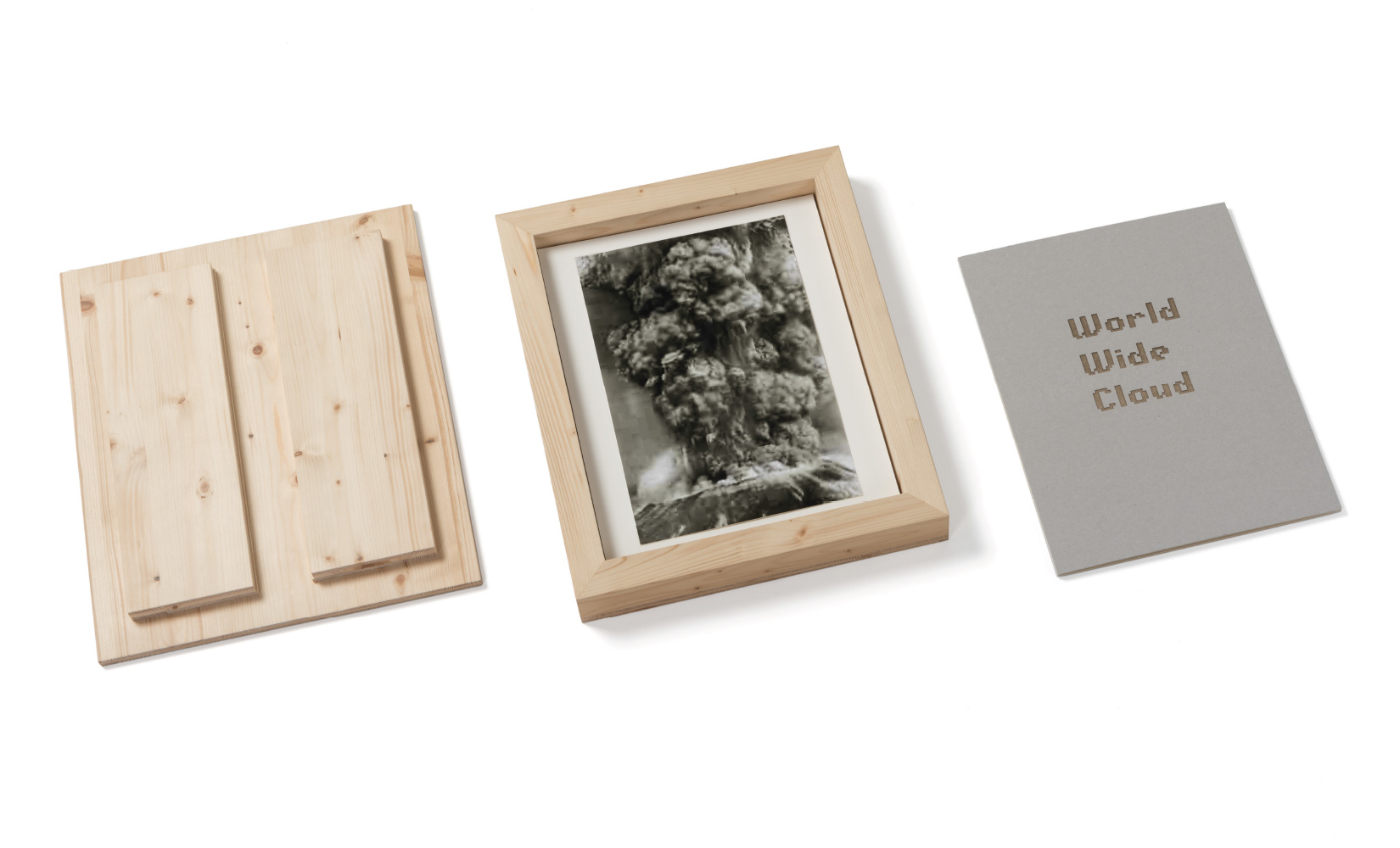 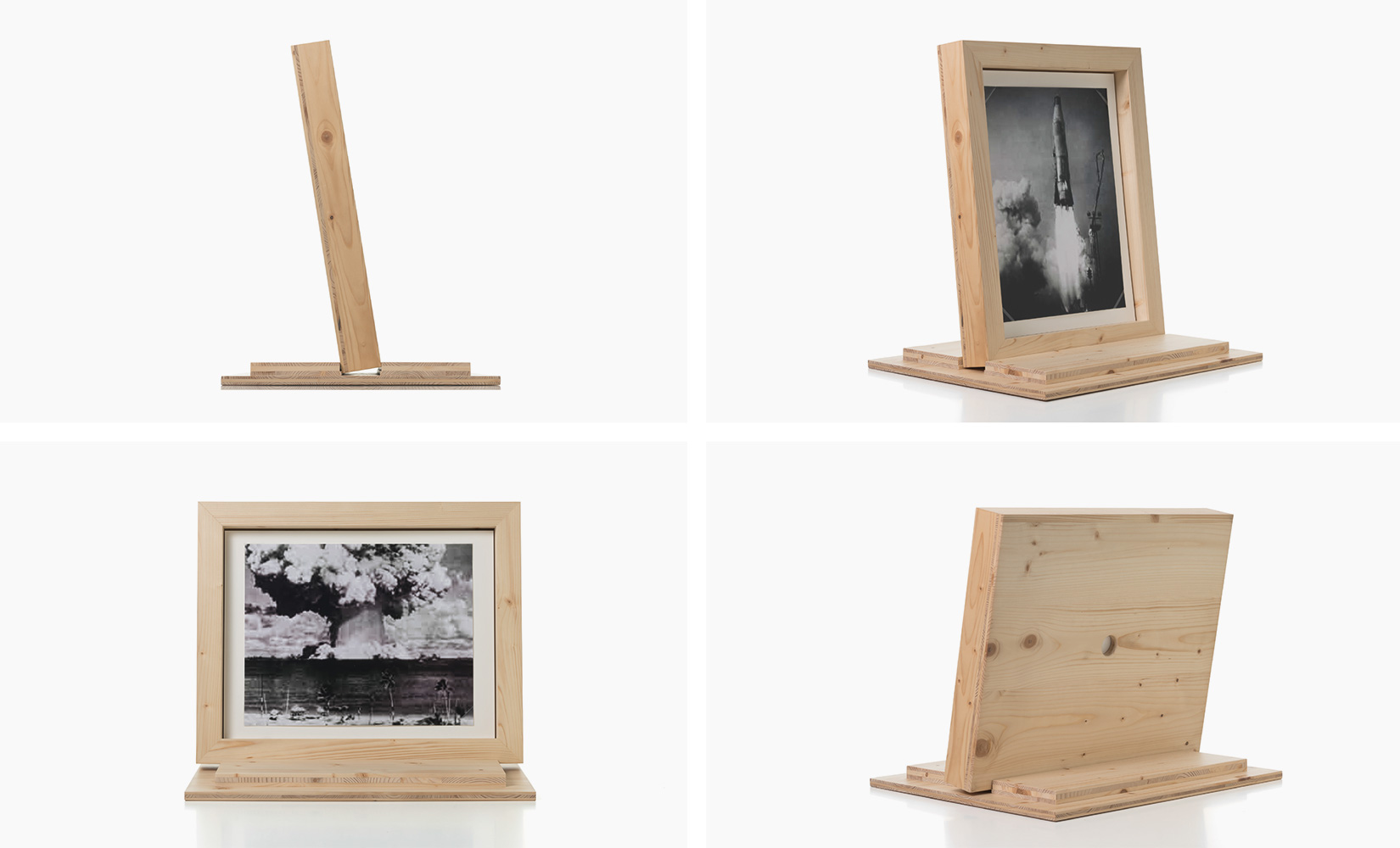 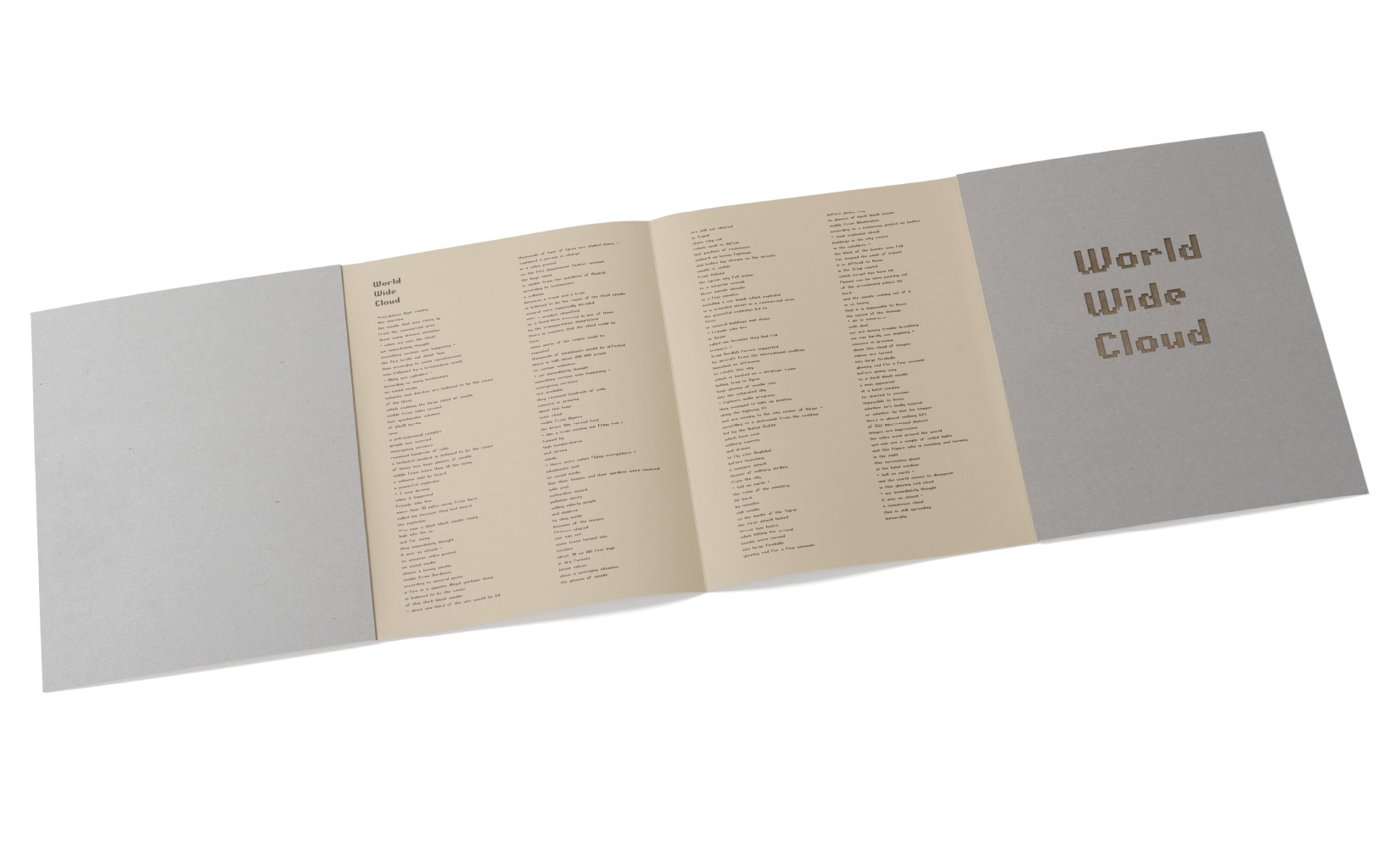 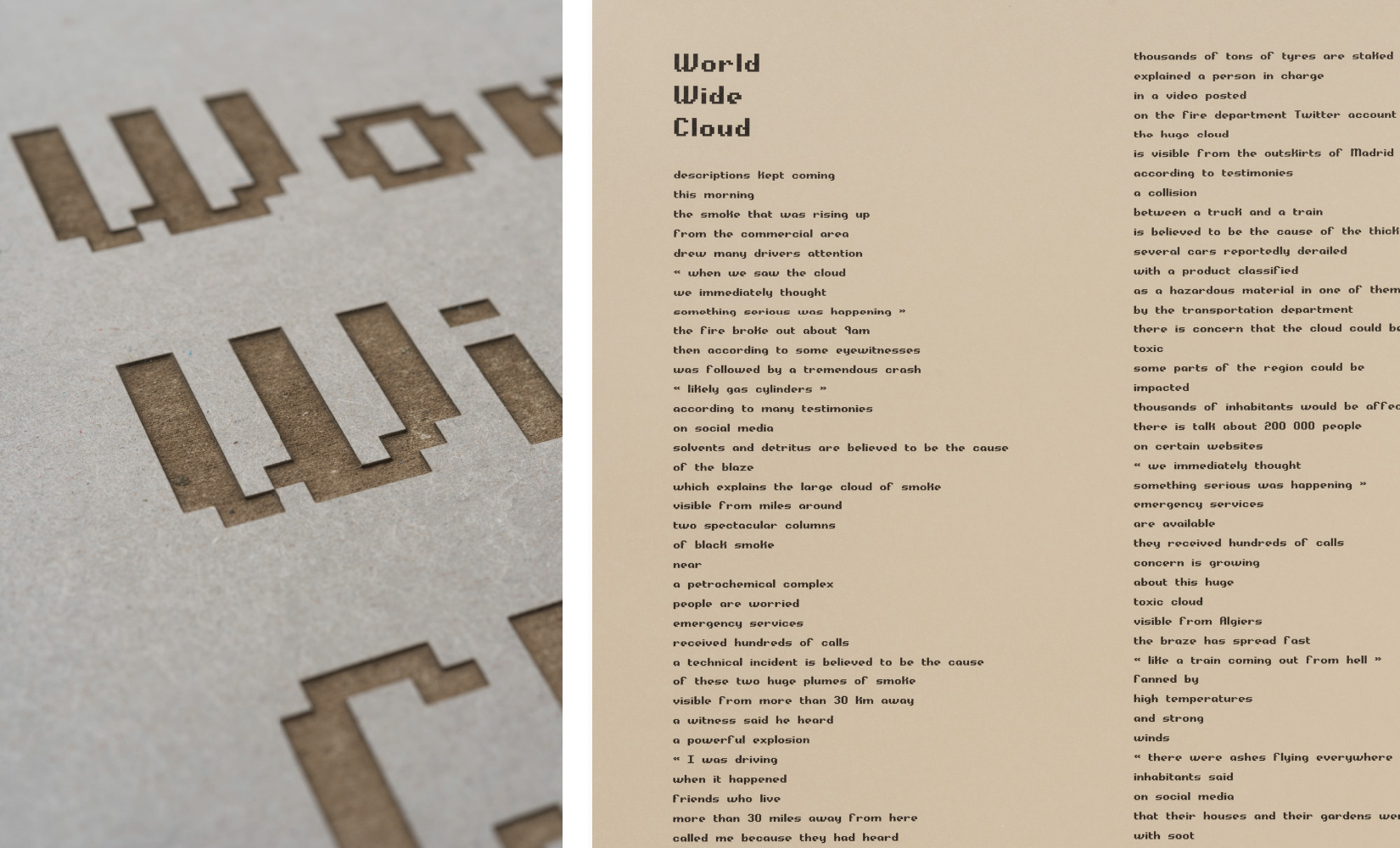 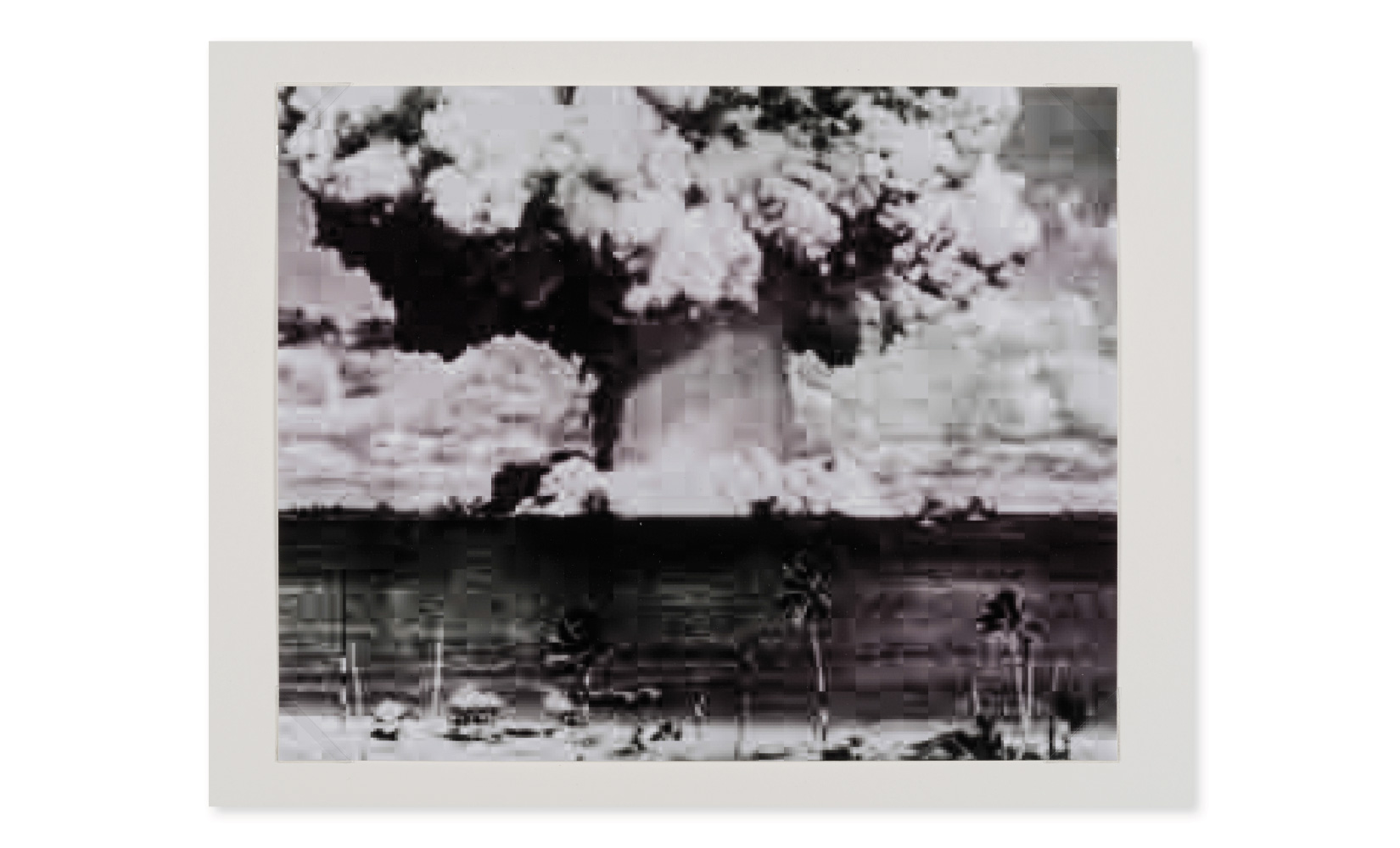 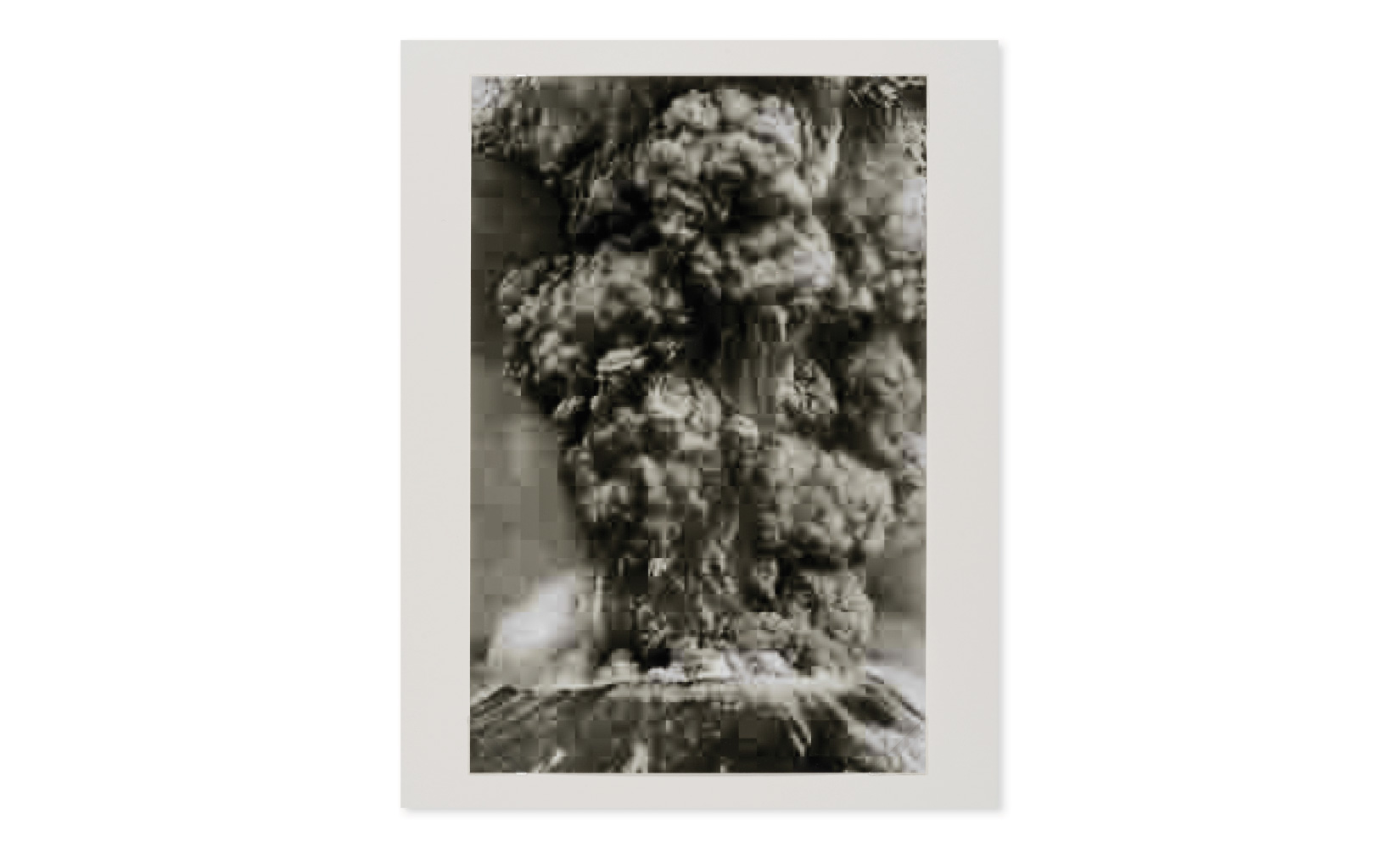 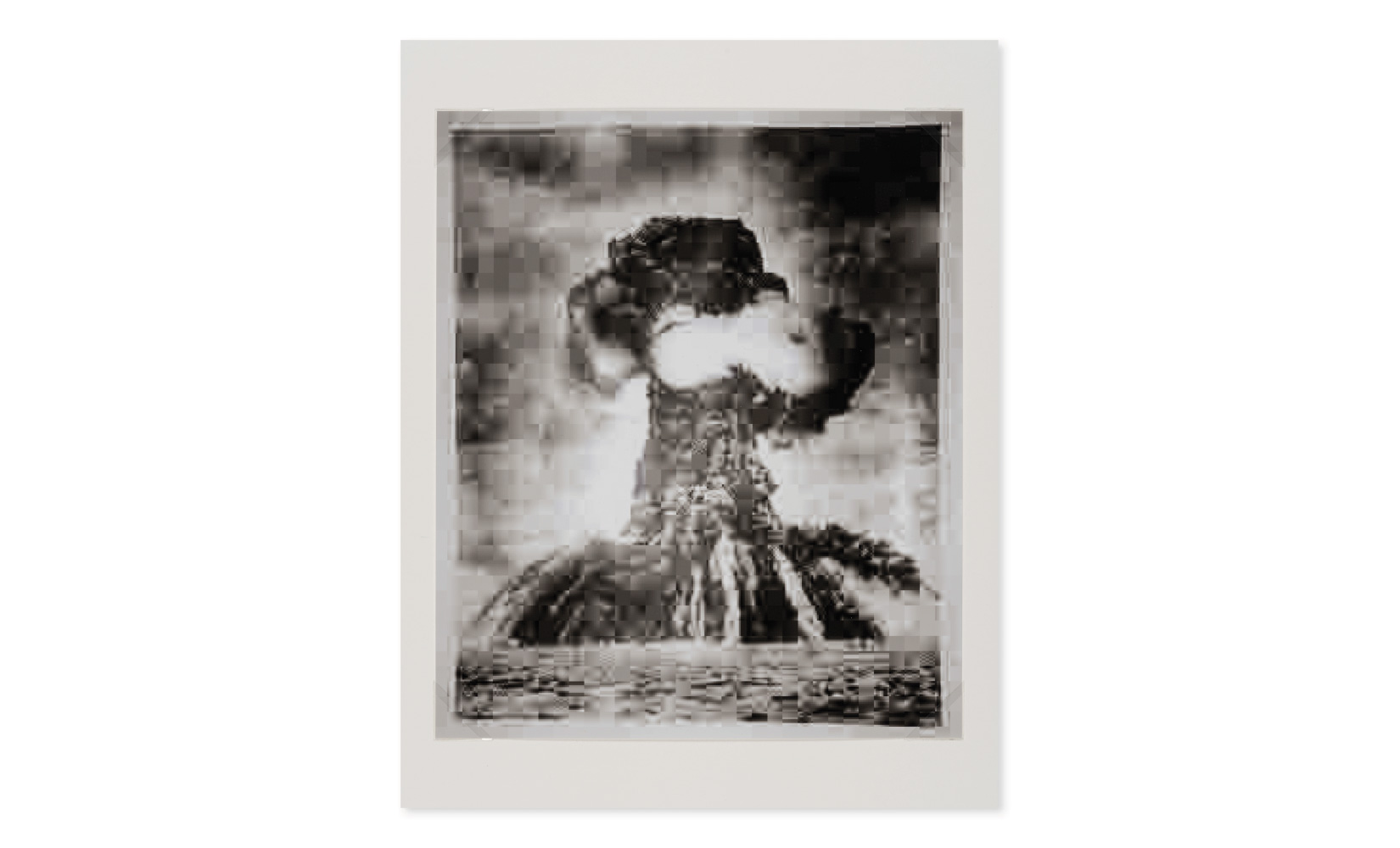 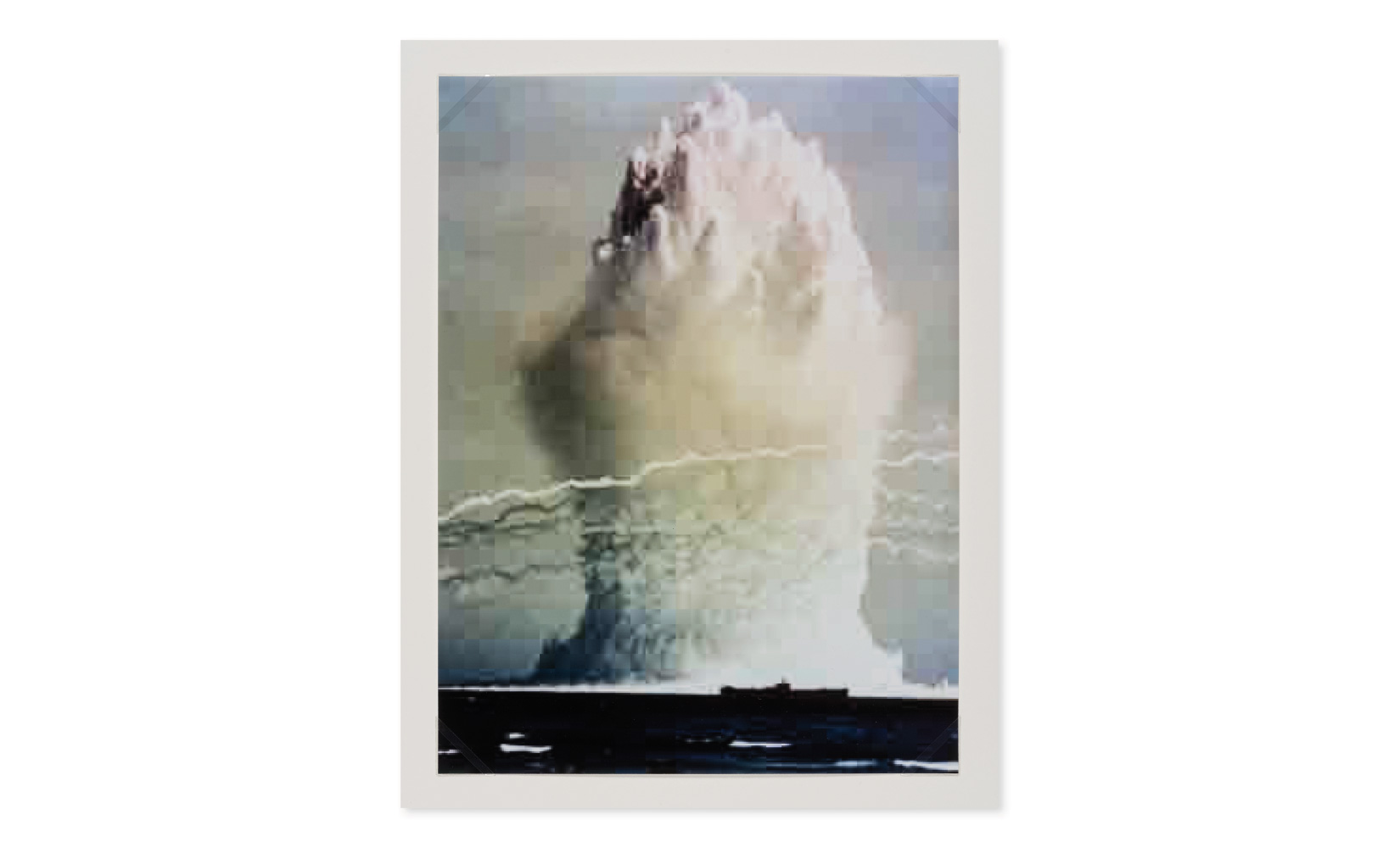 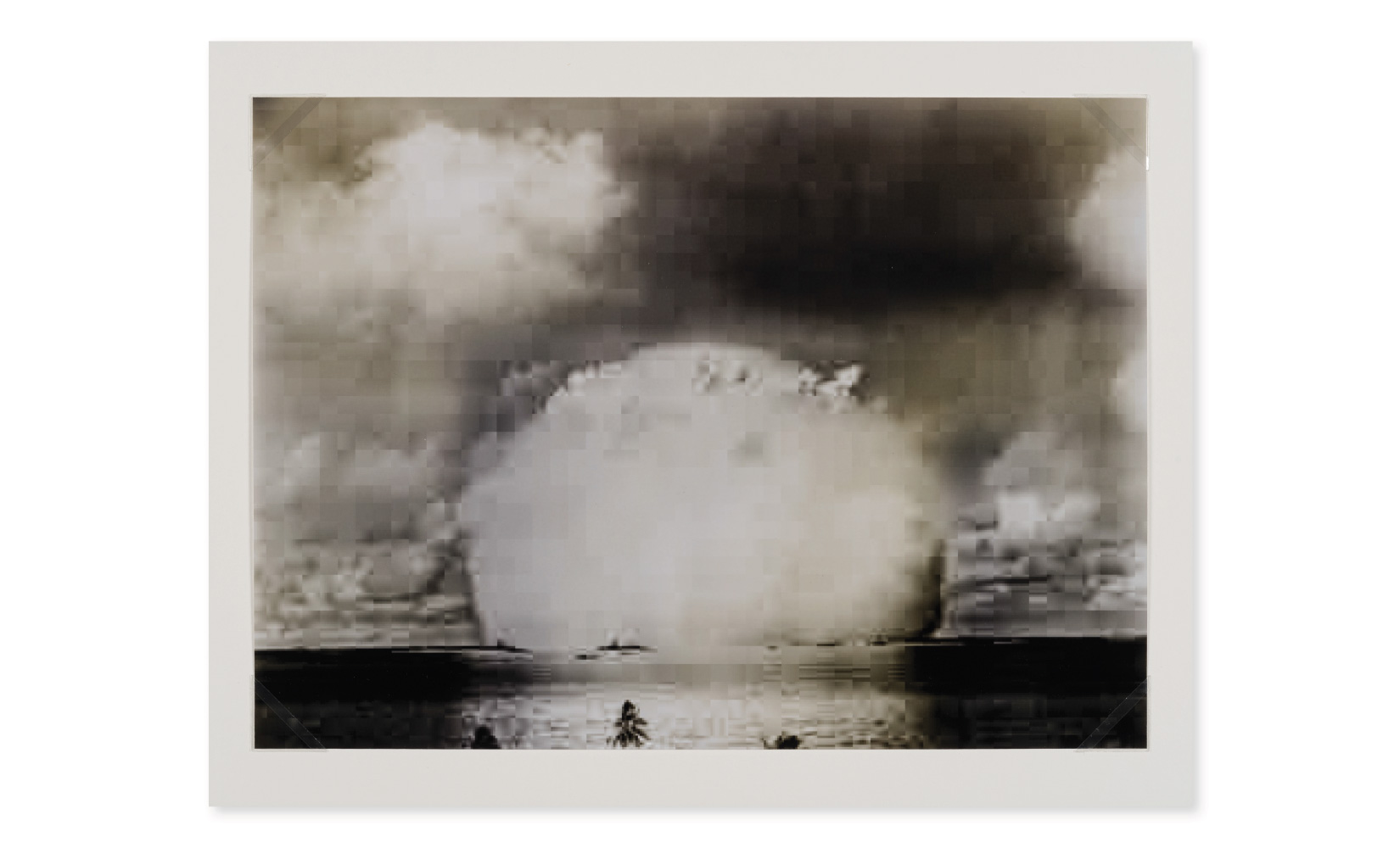 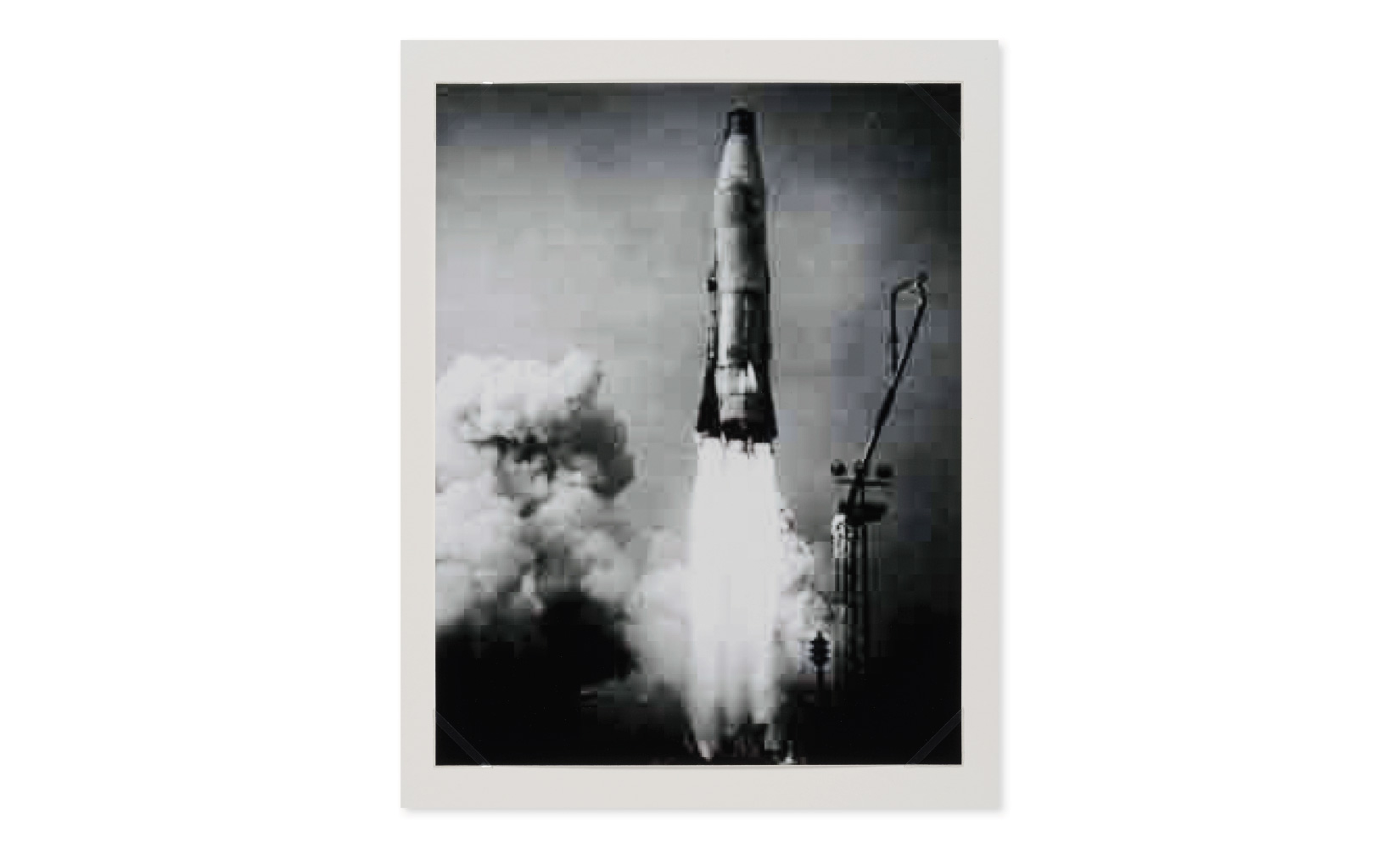 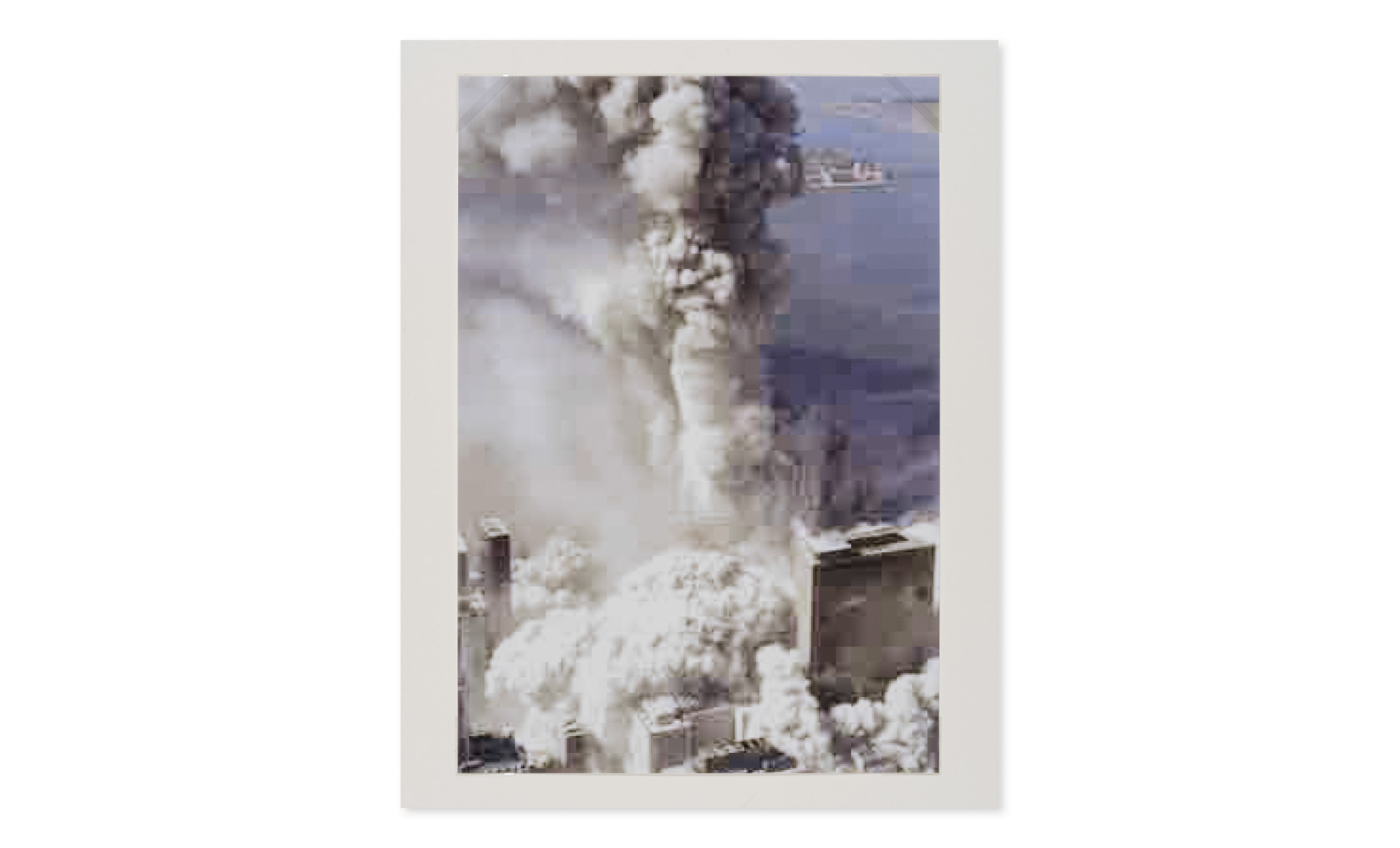 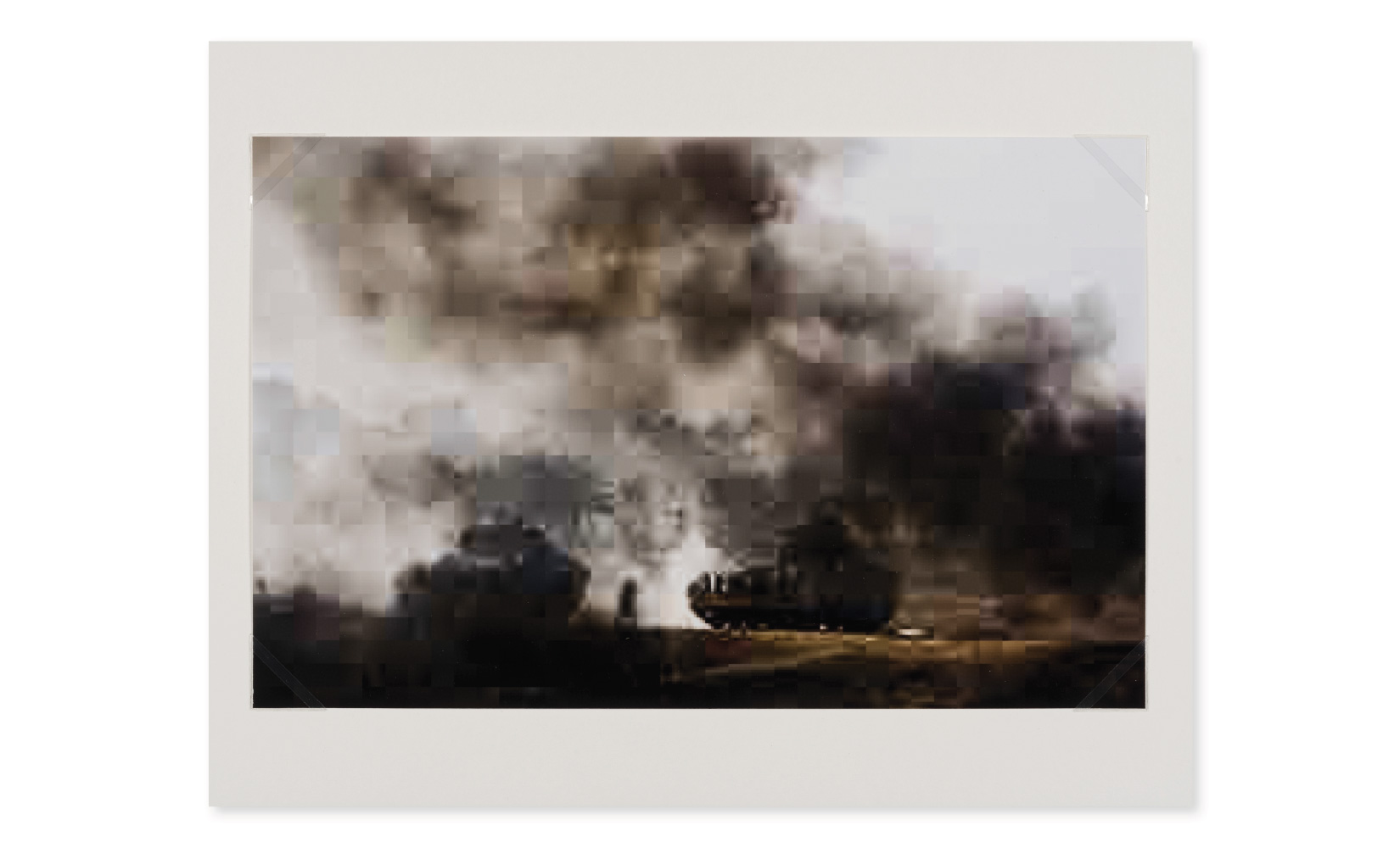 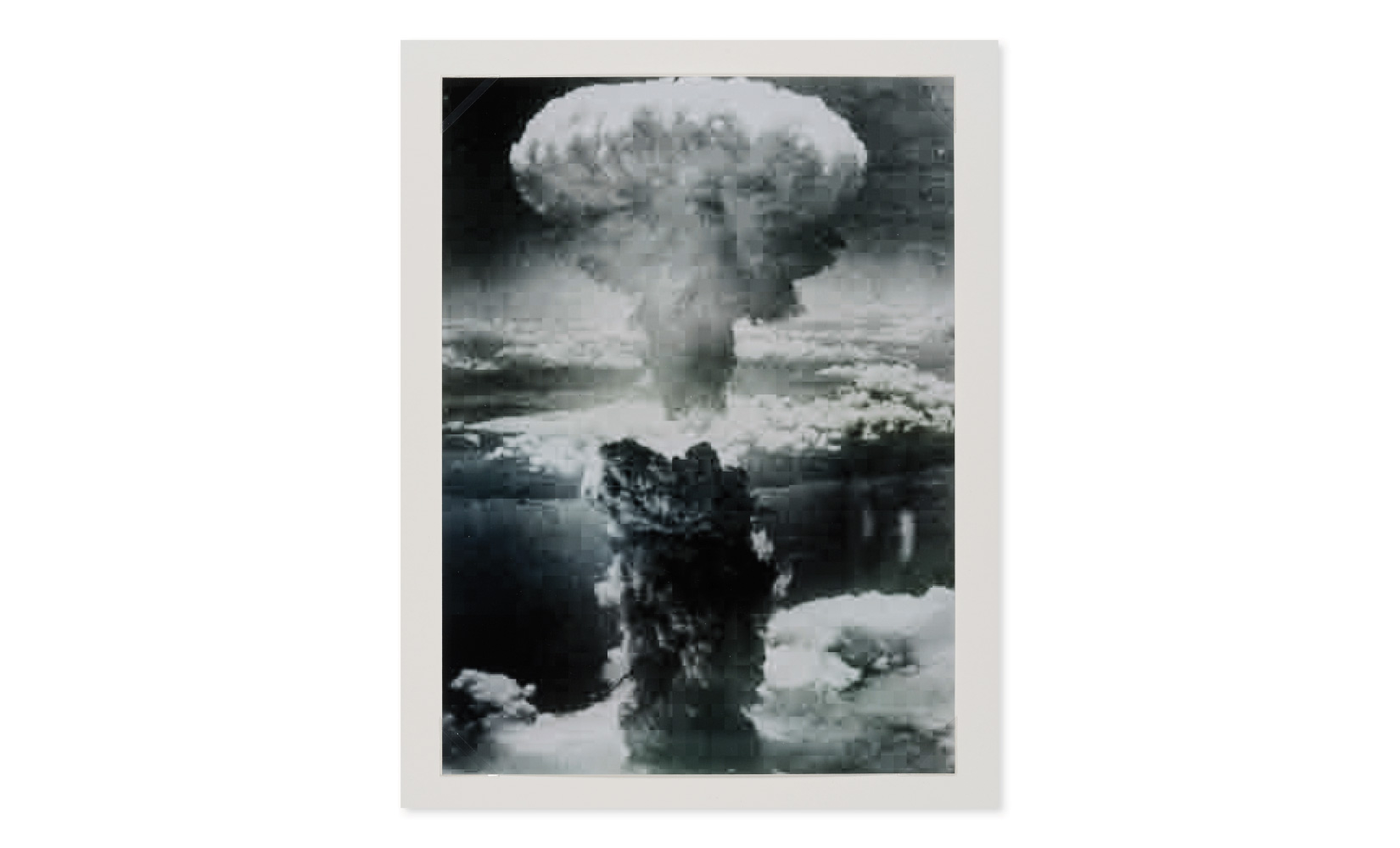 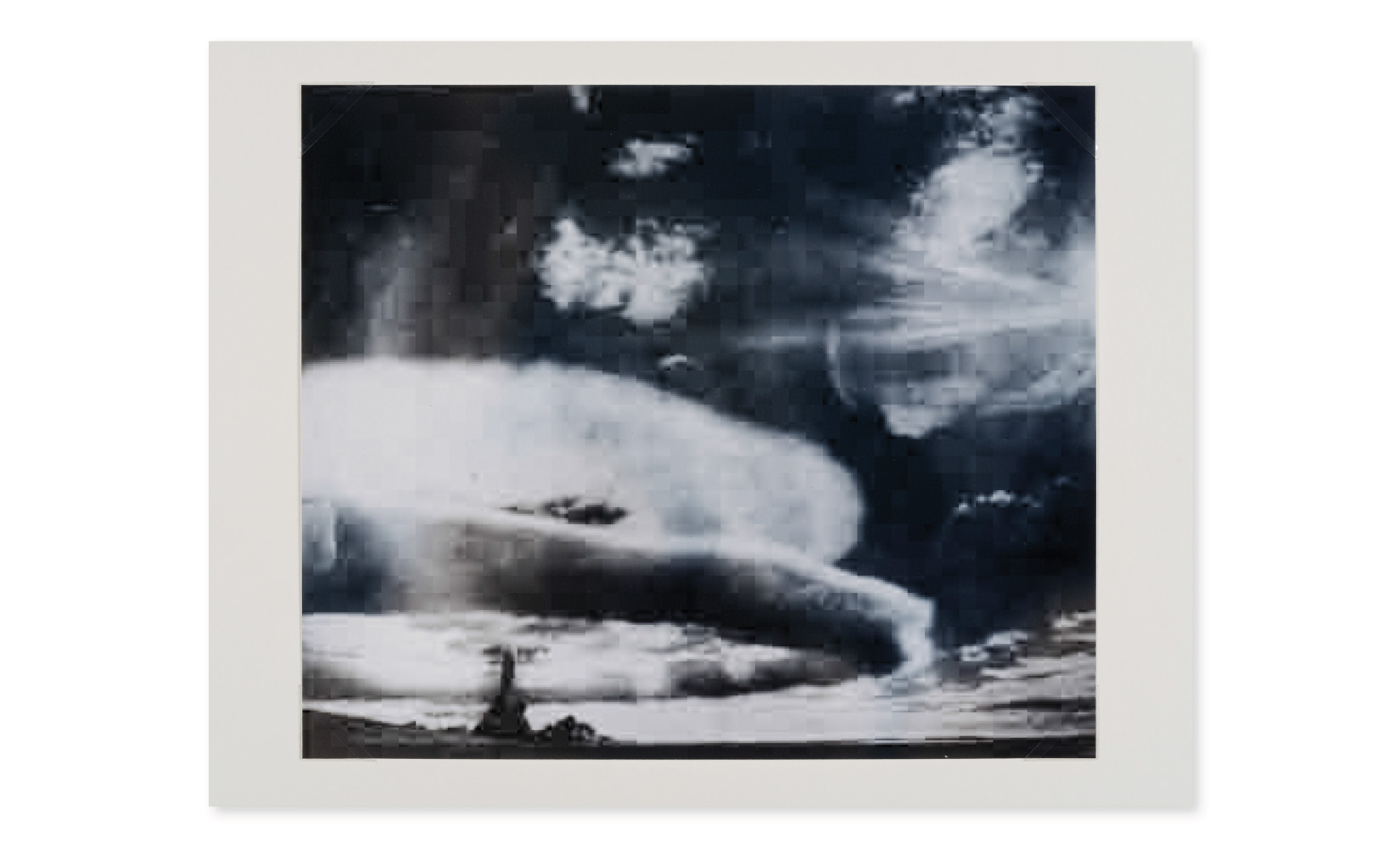 For more than ten years now, Thomas Ruff has been gleaning the web for images to use in various series, including the one whose title he has taken from a common digital filename extension: jpeg (formed from the initials of Joint Photographic Experts Group).

The resolution of these digital images is a function of the number of pixels they are composed of. Thomas Ruff uses grids of identical dimensions, which determine images of a constant digital “weight.” These grids constitute abstractions which, observed from a certain distance, produce traces of images extracted from an unnameable corpus.

The images gathered in this work show billows of smoke, destined to disappear, whose causes ―the events that produced them― remain a matter of speculation.

They are accompanied by a poem by Patrick Bouvet, which signals the ubiquity of a catastrophe “visible from” Bordeaux, the outskirts of Madrid, Algiers, Tripoli, Kobané, Washington…

The upper face of the pinewood container designed by Jacques Herzog and Pierre de Meuron is covered by a printed image ―specially produced for each copy― representing the JPEG image of the wooden lid on which it is printed.

Born in 1958 in Zell am Harmersbach, a small town in the Black Forest, between Strasbourg and Fribourg, Thomas Ruff studied fine arts in Düsseldorf under Gerhard Richter and Bernd Becher and has become himself a major figure in contemporary art. His work is characterized by a certain distancing, especially in his first series of portraits, which depicted members of his family and friends, framed straight on, at the focal length of the human eye, drawing on the esthetic of ID photos and in indirect allusion to the “years of lead” in the Soviet-dominated East Germany of the 1970s. Ruff then turned to photographing industrial landscapes to the north of the Ruhr, cut out against pale winter skies at dawn, in strikingly neutral tones. Since 2000, he has been gleaning images from the web, which he then enlarges considerably, decomposing them into a uniform grid, which seems to submit the notion of the pixel not to its technological function but rather to a geometrical pattern. This was the origin of the series Jpegs. Thomas Ruff’s work, often conceptual, has crossed the lines of multiple genres. It can be found in museums all over the world and has been exhibited on numerous occasions. His atelier in Düsseldorf is housed in a building designed by Herzog & de Meuron, whose work Ruff has frequently photographed.

In the 1980s, Patrick Bouvet was a singer and composer of rock music, with a predilection for music described as repetitive. In the 1990s he began to explore sampling and collage. In 1999 he published a brief text entitled In Situ under the imprint of Éditions de l’Olivier. There followed Shot (2000), Direct (2002), Chaos Boy (2004), Canons (2007), Pulsion lumière (2012), Carte son (2014), and Petite histoire du spectacle industriel (2017), all under the same imprint, as well as Ciel à l’envers (2000), Expérience (2001), Client zéro (2002), and Flashes (2005), published by Éditions Inventaire/Invention. Shot was adapted for the theater by Véronique Caye and performed at the Ménagerie de verre in 2002. Shot/Direct, with a multimedia-reading and concert-installation, was performed by the collective MXM, under the direction of Cyril Teste, at the Festival d’Avignon in July of 2004. Patrick Bouvet has also written several radio plays. In 2007 he published an audiobook, Saison # 29 Territory, under the imprint of Filigrane Éditions. His language is a sort of political poetry that draws images and illuminations from the flux of media content.

The agency of Jacques Herzog and Pierre de Meuron, which has branches in Europe, Asia, and the Americas, was established in Bâle in 1978. The two architects have designed public buildings (from stadiums to museums to libraries), as well as factories, apartment houses, and single-family residences. They were awarded the Pritzker Prize in 2001. One of the members of the jury commented at the time: “They refine the traditions of modernism to elemental simplicity, while transforming materials and surfaces through the exploration of new treatments and techniques.” The year before, their renovation of the Tate Modern had met with unanimous acclaim. In 2016, they designed the Elbphilharmonie concert hall in Hamburg. In 2007 they were awarded the Praemium Imperiale ―the “Nobel Prize of the arts”― by the Japan Art Association.